I Promised a Picture…

Two  weeks ago ( it seems like forever!) I reported our landing of a big mahi-mahi.  At the time I posted I couldn’t post a photo over the satellite link, but now I can: 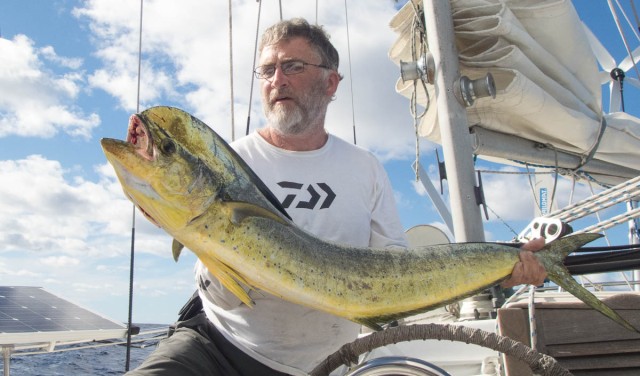 This fish is everywhere in the tropical oceans, hence it has collected a huge number of names in different languages. The traditional English name is “dolphin”.  When it started showing up on restaurant menus the marketing guys pretty quickly figured out that people might think they were being served Flipper steaks, so they nixed the “dolphin” name and picked up the Hawaiian name, “mahi-mahi”.  In Spainish it’s known as the “dorado”, and “coriphehe” in French.

These fish grow REALLY fast.  One this size is only about a year old.  In the picture it certainly looks a pretty fish, but while still alive, and in the water, the colors are beyond belief.  I could go on trying to describe it, but it’s not possible.  Green, blue and gold that are brighter than they can possibly be with the sun shining on them. Not just bright, but also dynamic, changing and flashing as you watch.

This one met his end biting on that plain cedar plug that has been our “go-to” lure so far.

2 Responses to I Promised a Picture…