One of the things that Amel has done is to minimize the numbers of holes in the boat by designing a central “sea chest” so multiple users of salt water can share a single hole in the hull.  Although this does create certain challenges, the elimination of multiple catastrophic failure points is, overall, a good thing. It’s another one of those features that might not, by itself, be unique to Amel boats, but is an important part of the package that makes the Amels the great cruising boats they are.

Since we were out of the water anyway, it seemed like a good opportunity to inspect in detail the manifold that is used to divert the water to the various use points on the boat. Owners have been warned that after 20 years a complete inspection of these is a very good idea, since some boats had experienced significant corrosion of the metal parts.

Being made of copper, ours looked a little gnarly on the outside, covered in green verdigris. But, after a complete wire brushing, it cleaned up nicely.  No obvious loss of wall thickness at all.  The brazed joints all looked good too.

For other Amel owners who might care, here it the part and its key dimensions: 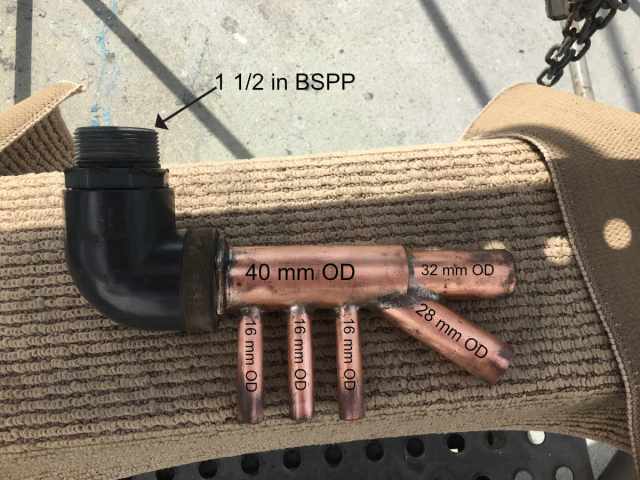 This part is attached to the strainer basket, and is oriented vertically with the 32 mm outlet pointing downward.  The main engine draws water from the 32 mm outlet, the genset from the 28 mm one.  The 16 mm outlets go to the two AC pumps, and the watermaker.

Once I had it all clean and shiny, I gave the outside a coat of new paint, and it is ready to reinstall for another 20 years of service. Why is Harmonie‘s manifold in almost like new condition, while other boats have had these corrode away? I have no idea…

A couple of notes. I mentioned “wire brushing” above.  One thing that should never be on a boat–ever–is a steel wire brush.  It impregnates anything it is used on with little bits of steel which act as focus points for future corrosion.  Use either a brass or stainless wire brush, or one with non-metallic abrasive fingers.

Some people have commented on how impressed they were that Amel assembled hoses to fittings like this with both hose clamps AND an adhesive, apparently thinking it was a “belts and suspenders” kind of approach.  It’s not, really.  The adhesive is actually required because the flexible hoses are being attached to a fitting that has no barbs to give it a mechanical hold on the hose.  Especially for hoses that connect to the open ocean, like these, be sure to use BOTH clamps AND an adhesive.  It does make it a real pain to disassemble, but your boat won’t sink either.