Up the Food Chain in Monterey Harbor

This post was going to be about the sail we took out of the harbor yesterday to catch some fish. So I could brag about catching right where and when I expected. Which I did. 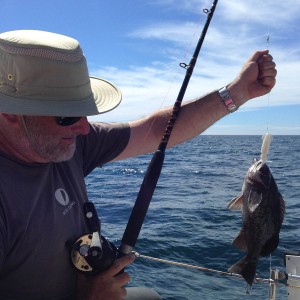 Cute, eh?  But more interesting pictures further down the story….

But the better story was after we got back to the dock.  The start goes back a few days, when a huge school of anchovies swam into the harbor and got stuck. They aren’t very bright, anchovies.  Millions, and millions of 3 to 4 inch fish were swarming around  in huge schools with their mouths open straining plankton from the water.

Yesterday morning the behavior of the tiny fish started to change.  The schools were moving slower, they weren’t feeding, and individual fish were occasionally splashing up to the surface.  My prediction was that they were running out of oxygen in the confined water of the harbor, and we were going to see a mass die off before long.  It had happened a couple of weeks ago, and the city scooped 15 TONS of dead fish out of the harbor.

When we got back from our fishing trip (did I mention we were successful?) I was getting ready to start cooking some fresh rockfish for dinner, when a large number of splashes attracted our attention out of the boat.  A large school of 12 to 18 inch long Pacific Mackerel have swarmed into the marina, and they are feasting on the anchovies. I rigged up a light rod and quickly caught a couple of the shiny green and silver torpedos for fun, but I started to worry about tangling with the sealions and otters. At this point the anchovies are dying in large numbers. Seals, sealions, and mackerel are feasting on the now sluggish schools making quite a show in the small harbor. Unknown to us, they were just the warm-up act.  Cue the next critter…

A woman’s startled cry, rushing water, and a loud roar of air announce the presence of a large humpback whale, his head rising feet from the dock, mouth full of anchovies.  Now,

Hardly room to turn around between the docks.

when I say “feet from the dock” I don’t mean 100 or 50 feet.  I don’t mean 10 feet.  I mean like five–reach out and touch him kinds of–feet.  For the next hour the whale swam around in this very confined corner of the harbor vacuuming up anchovies to the delight of a gathering crowd of tourists.

It was actually pretty amazing that an animal of this size (BIG!) and used to the open ocean was able to maneuver in such a confined space and never touch a dock or moored boat.

As it got dark, the whale left, and the the last of the anchovies were dying. Kind of beyond awesome an awesome kind of day.  Oh, yes, the rockfish was very tasty, when I finally got around to cooking it.

This entry was posted in Critters. Bookmark the permalink.

1 Response to Up the Food Chain in Monterey Harbor