The winds last night were light and variable, but enough to keep moving. We kept push on until about noon, when they dropped the less than 4 knots, so we fired up the diesel to keep moving. Now, we are in the full blast of the Gulf Stream, we are being pushed along by a current of between 3 and 3 1/2 knots. Our cruising speed under power is about 6.5 knots, so we are flying along at almost ten relative to the ground.

Much more sealife visible around the boat today. Several pods of dolphin, lots of flying fish. Karen even spotted a turtle. We took some time to set the fishing lines this afternoon.

Karen woke me from an afternoon nap (Hey, this Captain stuff is hard work!) to look at what she first thought was a whale, which turned out to be another group of dolphin. A few minutes later, the drag on one of the rods screeches the announcement that we have been bit! I throw the engine into neutral, and on my way to the stern, I see it is the “big” rod. The largest lure, trolled the deepest.

Karen clears the other lines out of the way, and all I can do is hold on while line peels off the reel, and the fish dives deep, violently shaking his head trying to throw off what he thought was going to be a tasty dinner.

Half way back to the surface, he dives again. Pulling 80lb strength wire rapidly off the reel. For a little bit he runs back toward me, and I think he has gotten off, but getting the line tight again, he’s still there.

We didn’t weigh him, but did bring up the tape measure. 5 feet 5 inches. Steaks and fillets now fill our freezer!

For those of you who may not know the wahoo, it is a long, streamlined member of the tuna family. One of the fastest swimming fish in the ocean, with a mouthful of razor sharp teeth. Their modus operandi is to lurk deeper in the water column, looking up for their prey.  They charge up from below, chop the unlucky target in half with those fearsome teeth, and come back for the pieces. 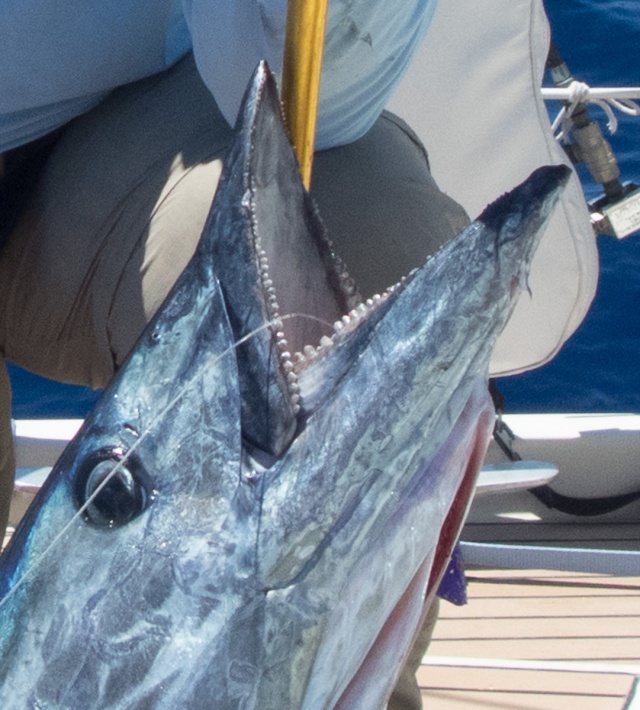 Now THAT’S a set of Choppers!!

Here is what we caught him on.  This lure was new and unmarked when it went in the water… 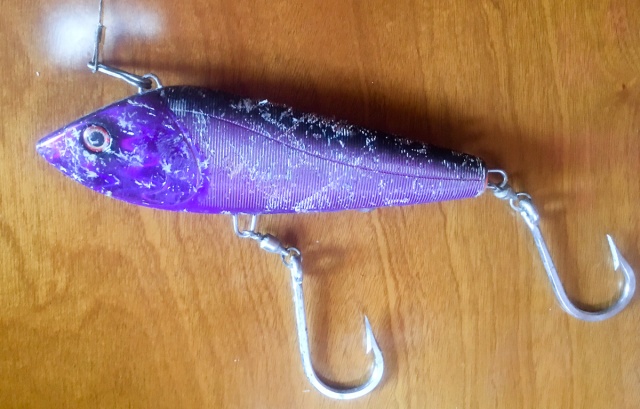 In Hawaiian the are call “Ono”, which also means “delicious”, which they are!