Stars Above and Stars Below

After leaving the busy harbor of Gorda Sound, we sailed around the northern end of Virgin Gorda to completely different world.  The windward side of Virgin Gorda has only one viable harbor, and the entrance is a challenging one with shallow reefs on either side and another in the middle of the unmarked entrance channel.  All of the charter companies red-line this harbor as off limits to their boats.  After sailing about 12 miles, we ended up just a mile or so from where we were anchored in Gorda Sound as the crow files, but on the other side of the island it was a world apart. Here are pictures of the anchorage: 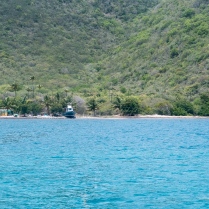 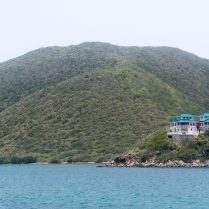 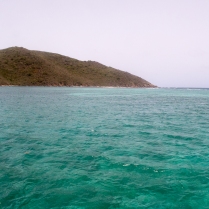 Anybody who has been to the BVI on a charter boat will not believe that such an anchorage exists here, with NO other boats, no bars, no resorts…

Beautiful, calm, protected, quiet.  It is everything you could imagine the ideal tropical harbor might be. But, as they might say on the cheesy infomercial, “But wait, there is more!”

We were lucky enough to be here on the right night, just the right number of days after the full moon.  Shortly after dark, Karen was the first to notice the lights in the water.  Now, we have seen lots of phosphorescent plankton.  Generally they are impressive only when it is REALLY dark. Moon light  can totally overwhelm them.  But this was different.  Hundreds of bright points of light would appear in waves across the bay.  Brighter by far than stars, I’d compare them to the brightness of terrestrial fireflies.  Toward the end of the display, I was even able to capture them on camera.  Not in the numbers that were present earlier, but still enough to give you a good idea. 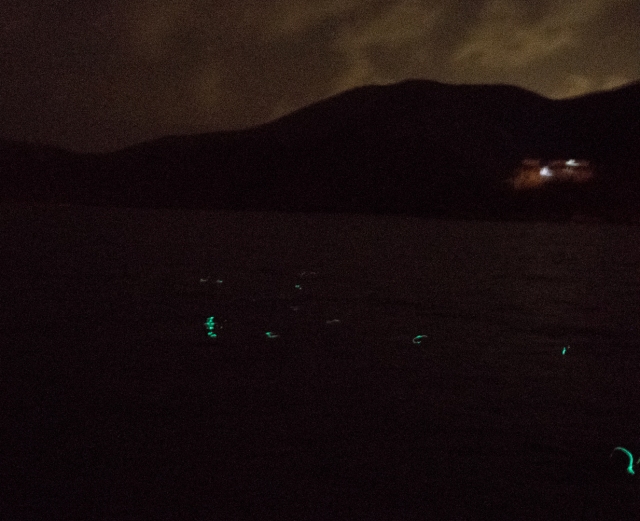 They were breeding polychaete worms.  About an inch long.  The light is used to attract a mate and synchronize the release of gametes into the water column.  It was just amazing to watch the dark bay light up first in isolated spots, then more and more over the course of a minute or so to a peak, and then fade to back black.  The process would repeat every few minutes. A beautiful display, we had all to ourselves.

For anybody interested, the picture of the worms was taken with my new Nikon D500 set at ISO 32,000.  Exposure of 1 second at f2.8.  Pretty amazing. I would have had even better pictures, but I didn’t think it was possible, and did not try until it was almost too late!  I balanced the lighting in the picture so that it looks as much like the scene would look to your eyes as possible.  The light in the sky from behind the hill was from a town on the north shore of Virgin Gorda.  The two lights on the hill are on the large blue-roofed white house you can see on the daytime pictures above.

1 Response to Stars Above and Stars Below