If you haven’t had the chance, go back to our previous post: Eat Snail  I have updated it with some fun photographs now that we are connected again… 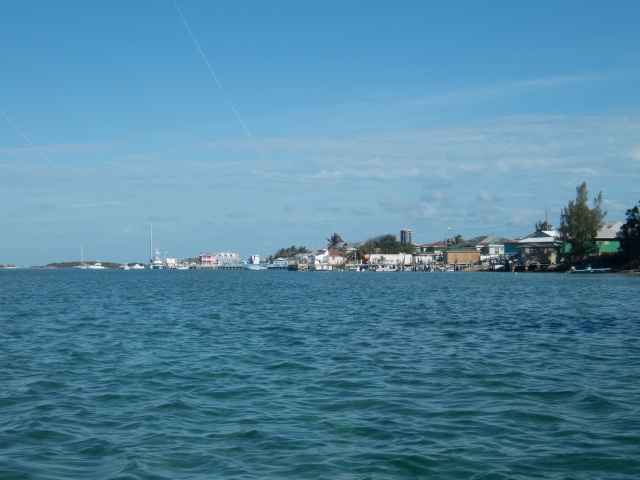 We have hooked WHAT?

Last night, we had settled in at a comfortable anchorage near Grand Cay in the Abacos.  Shallow water (8 feet), mostly clear sand bottom, breezy (15 to 18 knots) but not anything out of the ordinary.  The last thing we expected was a problem with the anchor .

As part of our normal bedtime routine, I set up the anchor alarm program on my phone.  A few minutes later, the alarm is sounding. Sure enough, we are dragging downwind.  Slowly, but definitely.  In the pitch black, before the moon rise, we get the anchor up and motor back to where we want to be.  Again we drop the anchor.  This time with a LOT of chain out.  At first, it looks good, but a gust of wind, and off we go again.  This is really strange.  I am beginning to have fantasies of replacing this anchor, forgetting that it has held us 199 times out of 200.

One more time, up the anchor comes.  After it clears the water, Karen gets a good look at it with the flashlight.  Ah-Ha!  Stuck on the point of the anchor is… an outboard motor! She manages to get the debris free, and this time the anchor sets down into the bottom like it was bolted down.

Off one of the tiny islands surrounding Grand Cay is a huge pile of metal.  From a distance it is not at all clear what it is, but close up, we could see it was the remains of a work barge.  The three tall pilings could be driven down into the bottom to lift the barge out of the water and provide a stable work platform for… whatever.  We haven’t had a chance yet to get the scoop from one of the locals, but a good guess is it was parked there

to ride out a hurricane…  which it didn’t.

An irony… googling the name of the barge–Jim Gibson–turns up a famous English photographer from the Cornish coast who specialized in… yep… shipwrecks.