When we first came into the narrow channel that is what passes for a harbor on Spanish Wells, we were greeted by the local fishing fleet.  Virtually all the boats are in port right now because they specialize in deep water lobster, and the season is closed until August.

As a whole, this has impressed me as about the neatest, cleanest, best maintained fishing fleet I have seen anywhere.  There is not a rust bucket among them. They take pride in their boats and it shows.

Spanish Wells itself has a very different flavor than any of the other Bahama islands we have been on.  Much of this area was originally settled by Loyalists who left what was going to become the US after the British pulled out.  It was always a fishing area, so never had a population of slaves.  The local speech cadence has more in common with northern England and Scotland than the island Creole of the rest of the Bahamas.  Overall a prosperous and pretty place.

Giving new meaning to the term “railroad crossing,” this is one of the fishing fleet hauled out for painting using the local marine railway.

The road with the removable single lane bridge over the railway is the main street on the island.

If you use Google to suggest things to do on Spanish Wells, you’ll get a good flavor for this island when you see that six of the top ten things to do are:  Fishing.

We stayed at a delightful small marina, Spanish Wells Yacht Haven.  Surprisingly, much of their business is boats coming over from Florida for the weekend.  They were packed on Saturday, and almost empty by Tuesday.  A good restaurant, and a small collection of rental cottages completed the campus. We did get to see some nice boats… 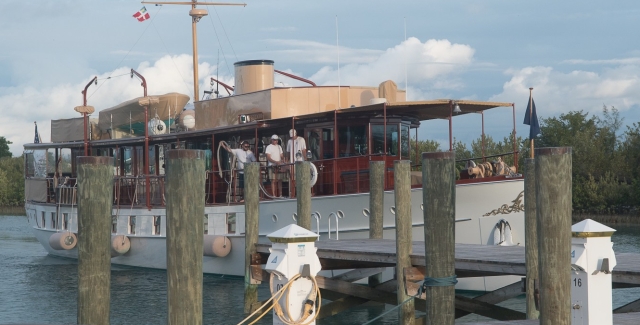 This is Freedom out of Newport, RI:  102 feet of fresh, shiny varnish and polished brass.  They don’t build them like that anymore! Apparently a regular visitor at the marina.

Grocery shopping was productive, once you knew that the ship with the supplies from Nassau arrives on Tuesday morning, and fresh produce hits the shelves at 3:30 that afternoon.  Prices vary from cheap to insanely expensive, depending on what arrives in what quantity.  The week we were there, the distributor in Nassau had a surplus of tomatoes.  So they put a bunch extra on the boat to Spanish Wells, and suddenly tomatoes are cheap!

We took a side trip to Harbor Island.  There is a water route up and over the northern tip of Eleuthera that has been given the dangerously evocative name,  “The Devil’s Backbone.” Although deep enough to take Harmonie there, the guide book suggests anyone who doesn’t pick up a local pilot to make the trip sort of deserves what they get, so we took local transport.  A slow ferry over to Eleuthera, a taxi ride across the island, and then another ferry over to Harbor Island.

Since we had already eaten, and it was far to early in the afternoon for any serious drinking, we hiked to the beach.  A nice beach it is, but…  it has people!  And beach chairs!  And really fancy resorts! We have gotten a bit spoiled with having beaches at least as pretty, all to ourselves.

With rain threatening, we hiked back to the commercial side of the island, and Karen did some shopping in some very gentrified stores.  Honestly, the customers and clerks called each other, “Daahrling!”  I was, shall we say, not in my element.