The Chesapeake Bay is a beautiful place to have a boat.  There are thousands of miles of coastline, you could cruise here for a lifetime and still see a new anchorage whenever you wanted to.

This time of year is the beginning of breeding season for the Ospreys.  In the last few days we have seen far more of these amazing birds that we have seen seagulls.  Not that there is anything wrong with being a seagull…

Every daymark and fixed navigation light on the bay has its resident osprey nest, a huge pile of large sticks.  Once the eggs are laid, the nest is under constant surveillance by one parent of the other all the time.  I imagine an unattended osprey chick would be just the thing to attract one of the local Bald Eagles. 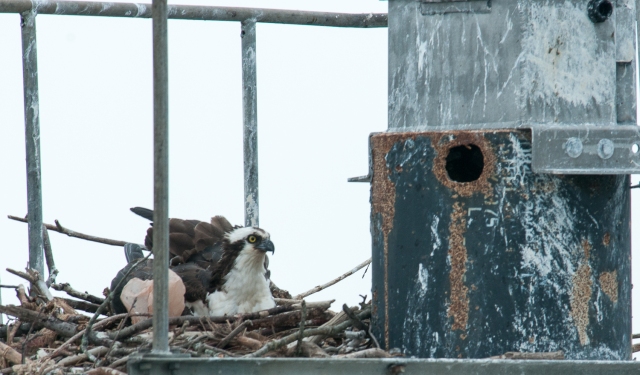 We get the stink-eye for sailing a bit too close to the channel marker this osprey calls home.

The Osprey, and a whole host of creatures here in the bay are here because of the huge number of menhaden, a large herring like fish that school in these waters in huge numbers.  Depending on where you are from, they are also called mossbunker, bunker, pogy, bony-fish, hard-head, Bug-fish, bug-head, Fat-back, Yellow-tail, yellow-tailed shad, green-tail, and probably other names.

There is a large fleet of 170 foot long purse-seine boats that roam the bay scooping up menhaden by the ton.  They locate a school of fish, frequently with the help of a spotter airplane, and use a pair of small boats to pull a net around them.  The bottom of the net is snugged tight, and the whole school is then winched onboard.

A menhaden purse-seiner recovers her dories after pulling in her nets.

Anchoring here in the bay is different than we have gotten used to in our months in the Bahamas. In the islands we were always anchored in clean sand.  The anchor typically came up cleaner than it went down.  Here the bottom is sticky, cohesive mud. It clogs the anchor chain, and requires careful attention to rinse off before it gets into the chain locker.  Another complication, is the bottom is frequently composed of a layer of very soft gooey mud on top, with hard, dense pack silt under.  It takes time for the anchor to find a bite in the underlying layer, and the top layer is too soft to hold.  If you pull on the anchor right after you drop it, it just plows through the soft layer on the surface, but after sitting overnight, the windlass struggles to pull it free of the deeper layers it has sunken into.

When we visited here in the ast, it has always been in the fall.  With the approaching usmmer, we are picking up new cruising skills.  We are learning to be SURE that we have the boat buttoned up and fully screened at least an hour before sunset.  The number of mosquitos here is pretty spectacular.  I have seen places where they are thicker, but not as far out on the water as we usually anchor.

Another aspect of summer on this bay is there is little or no wind–except in the thunderstorms.  Now, to be fair I am exaggerating–a bit. But we have put more hours on our engine in the last week than we have in the previous three months.

Any negatives aside, the scenery is beautiful, the grocery stores are well stocked, the anchorages are delightful, and the people are friendly.  Can’t get any better than that (unless they kill the mosquitos!)

We are waiting out a rainy, blustery day on a mooring off downtown Annapolis, and will be moving to Back Creek in a few days, once again we are going to run through our project list and skim off the cream.

This entry was posted in Places, Places, People, Things to do., Underway. Bookmark the permalink.