Fishing our way to San Diego

The trip from Catalina Island to San Diego was not much in the way of wind, we motored probably 2/3rds of the way. But it was productive… 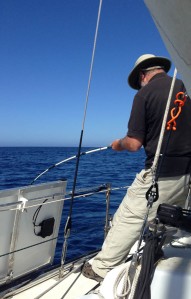 This time it is a small Yellowfin Tuna, also known as an Ahi.  Really, really good eating!  I think this makes it almost officially an El Nino weather year since catching these guys north of the Mexican border only happens in the warmer waters of El Nino. 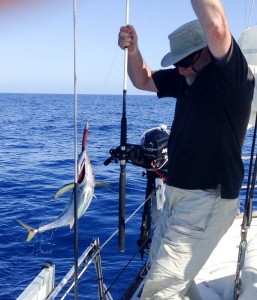 This is a pretty small Ahi, they get well over 100 lbs.  Interestingly, he wasn’t nearly as strong a fighter as the Skipjacks even though he was a little bigger. One reason might be is the Skipjacks are some of the “warm-blooded” tunas.  Cleaning them quickly after they land on deck you can feel the heat in their bodies. Kind creepy actually, filleting a fish with meat that is body temperature.  Much warmer than the water around them.  Not true with the Ahi. Like “normal” fish their bodies are at water temperature even after a fight on the line.

And then a little further along, Karen caught her first fish–ever!  A small yellowtail.  If you are a sushi fan you might know these as “hamachi”.

We found a large raft of floating kelp and detoured from our course line to swing the lures past it.  We were immediately hooked up into two small yellowtail, members of the snapper family. The one on my rod was the smaller of the two, and we tossed him back to grow a bit.  We could have caught dozens of these guys.  As we pulled the hooked ones to the boat, the whole school followed along.  Some of the school even trying to steal the lures from the mouths of the hooked fish!

Coming into San Diego at night was a bit of a challenge.  It was very busy at the harbor entrance with all of the long range tuna boats heading out with their cargo of hopeful fisherman.  As we made our way in the channel, a small boat pulled up behind and shadowed us for a few minutes before turning on his flashing blue light and pulling alongside.  “Oh-oh!  What did I do?”  It was US Customs.  A few questions across the water about where we had come from and where we were going and they wished us a good evening.

The anchorage itself was PACKED with boats.  My radar did a fantastic job picking out boats and buoys so we could find a place to squeeze ourselves in.  We were anchor down at about 12:30, and probably asleep by 12:33!

4 Responses to Fishing our way to San Diego