And the answers are…

Is called a “Tuna Missile”  If you  hook a large tuna it is used to bring the fish into the boat without ruining meat by sticking it with a gaff.

The neck opens up, and you slide it over your line.  A heavy line is tied to the missile.  It is then dropped down the line.  When it reaches the fish, the pointy bits close around the head letting you haul the fish onboard without damaging the meat. It is popular with commercial fisherman for whom getting the highest price per pound is critical. There was a fish market in Oakland that I frequented where you could buy fresh tuna steaks for $14 to $18 a pound.  In the next case over were “trimmings” from the same fish for $3 a pound.  Frequently the trimmings were pieces with gaff holes, or other handling bruises. Worth a bit of extra knife work at home for the difference, but you couldn’t send a piece like that to the high end sushi restaurant. http://yoshimurasangyo.com/missile.html

A hint that might help with the second item, is that it is a modification of 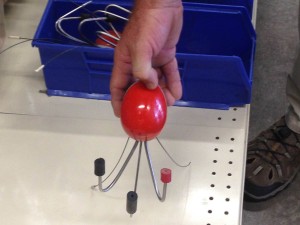 a traditional Hawaiian lure that was made with a large cowrie shell and a rock as weight instead of a painted egg of lead.

It is an octopus lure.  You lower it down to the bottom, the long pointy legs hold it upright.  In the clear water you watch… When an octopus comes out and grabs the painted part, thinking he has found his dinner, you yank it up, impaling the critter on the sharp upward facing prongs. Presto!  Octopus stew for your dinner!

2 Responses to And the answers are…