The Many Faces of Block Island.

Almost any new place we go to we arrive with some idea of what it is going to be like.  Since I had never been to Block Island before, but knew of it most of my life, I came here with a pretty good idea of what I’d find.  Much of what I expected I found, but other things surprised me.

We are anchored in the Great Salt Pond, a marvelous  harbor with complete protection in all directions.  The anchorage is deep,  and crowded.  There are a good number of boats that spend all summer here, but since it is only a 16 mile trip from the mainland many boats come for the weekend. Watching the “weekend warriors” anchor has taught me many new ways to anchor boats–all of them bad!

There is a launch service here that you hail on the radio, and for $4 they take you into shore.  We went in on Saturday morning and had our first walk-about.  This introduced me to a face of Block Island that I hadn’t known about.  Walking the marina docks at one in the afternoon, they were crowded with mostly small boats full of twenty- and thirty- somethings who were already working very hard to get very drunk.  The “party-hardy” side of Block Island wasn’t one I expected.

Here in the harbor, there are a huge variety of boats.  Several from Canada starting their annual migration to the south.  Some boats obviously serious cruisers, and a lot of boats that are just kind of not really very much into the technical details.  Take a look at the pictures for some highlights.

Yesterday we sailed around the island, stopping to fish in a promising looking spot.  For dinner we had the largest black sea bass I ever landed (see pictures again…)

An old Navy tug anchored here in Great Salt Pond that serves as a summer home.

The Lynx announced her arrival into the Great Salt Pond with a salute from her cannon.

Not huge as fish go, but a sea bass is a very tasty dinner, and this is the biggest one I have ever caught.

The lighthouse on the Northern end of Block Island.

The “Lynx” crossing the bow of “The Tree of Life”

One thing Block Island has is beautiful scenery. 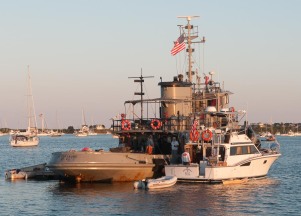 “Petersburg”, the former Navy tug that is our closest neighbor here in the anchorage.

A beautiful setting for a home.

The brick lighthouse on the southern tip of Block Island.

“Downtown” Block Island is dominated by the National Hotel.

Harmonie from the shore launch.
This entry was posted in Underway. Bookmark the permalink.