We arrived within the hour of predicted at the entrance of the Chesapeake Bay… which is pretty impressive for three days of uncertainties with weather and currents.  The wind forecasts were quite accurate as far as direction and time go. For some reason I find that the models very consistently underestimate the wind strength.  Not in a huge way, usually 5 to 7 knots or so, but it is just odd that it is a consistent error.

We found a quiet sheltered creek last night to anchor, and over the next couple of days we will be moving north the 100 miles or so toward Annapolis.

The One that Got Away

As we approached the coast and the rise up to the continental shelf, we had comfortable easy sailing, so we set out our fishing lines.  Shortly after that we found ourselves in the middle of the recreational tuna fishing fleet out of Ocean City that had made the weekend run out to “The Canyons.”

We saw a large pod of dolphins moving in a purposeful direction, and that usually means yellowfin tuna are nearby. We caught nothing, and saw none caught.  Some time after we crossed the continental shelf, I laid down for a short nap… when one of the reels screamed as a fish speed off with our lure.  It took us a few minutes to get the boat stopped, all the while the fish was running fast.  Just about the time the fish ran out of gas on his first (long!) run, the line went slack.

Whenever that happens, I wonder, what did I do wrong?  Did a knot slip?  Did a sharp tooth cut the line?  Did I apply too much pressure and break something?  When the end of the line came into sight, here it what we saw: 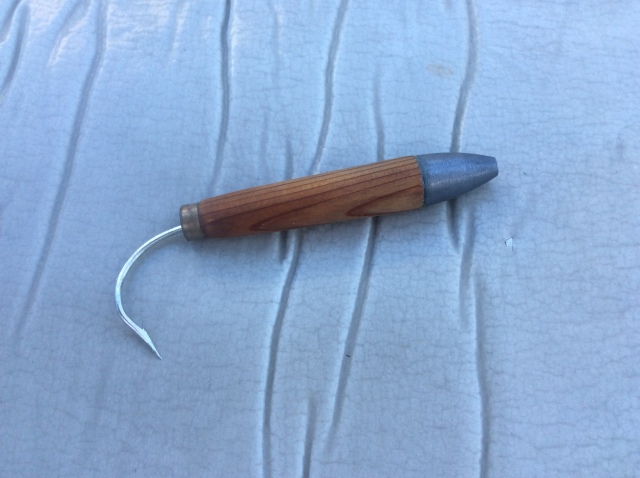 No, the hook did NOT start out that shape!  Those of you with a fishing interest who have been following our stories, might recognize that this is by far and away out most productive lure–and the cheapest.  The venerable cedar plug.  This fish, most likely a medium sized wahoo, picked this drab simple lure from an assortment of much flashier offerings.  If only I had rigged it with a heavier hook!

So far, the people we have heard from who were in Irma’s path survived in good health, even if some suffered serious loss of other kinds.  Good luck to Alexis, Libby and Alexandre.  If we know you and you have been in the path of the storm, drop us a line (when it’s easy for you) and let us know how you are doing.