A man with one watch knows what time it is. A man with two watches is never sure.

So much of the art of seamanship (as opposed to the science) is sorting through and dealing with information that might be missing, or contradictory.  When you are the Captain there really is nobody else who can tell you what to do, it is your decision.

One example of this is in open ocean weather forecasting.  On our boat we typically get the results of four or five different weather models.  Almost all the time, for the next 24 or 48 hours the results are essentially the same.  Sometimes they do differ and you have to decide what to do.  I have actually seen people complain about having multiple sources of weather forecasts.  They want “someone” to give them ONE answer.

Another place where we get multiple sources of information is from our charts.  We have three sources that we use regularly.  Some of our detailed electronic charts come from a company called Navionics.  They are well known and one of the larger players in the industry.  They supply the chart data that is displayed on the screen at Harmonie‘s helm.

We also have a program on an iPad called iSailor that uses data from Transas, a Dutch company that mostly supplies chart data to commercial ships.  As far as I know the iSailor program is the only way for a recreational boater to get their data.

Finally, we use paper charts.  The source of these varies depending on where we are.  In the Bahamas and Caribbean we have been using NV Charts, published by a German company.

What we have found… in Florida, and in the Bahamas, there is no comparison. If the charts offer different versions of the truth, you should always bet AGAINST the Navionics chart.  The Transas data through iSailor has been, by far, the more accurate.  You might wonder what prompted this post…

We decided to sail from Little San Salvador over to Eleuthera.  Part of the reason we decided to do this was to go to Rock Sound where we would have better protection from winds that were going to be a bit variable in direction for the next few days. Based on the depths we saw from our Navionics charts, we expected Rock Sound to be shallow, but nothing we couldn’t handle.  (Reminder: we draw 6 feet 7 inches).  No depths reported on our route in less than 7.5 feet, and we will be there when the (rising) tide should have depths 8 to 12 inches deeper than shown. 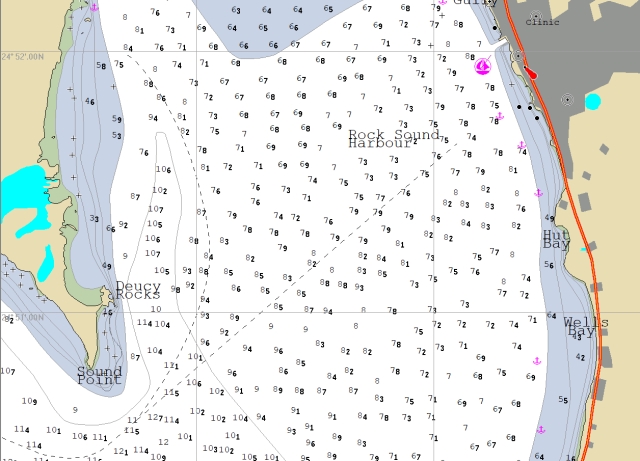 Well…  guess what… the ocean has not read the charts, or at least not the Navionics charts.  Let’s have a look at the depths reported by Transas in the same area…

Based on this chart we’d expect to be just barely clearing the bottom at this stage of tide, and maybe touching a bit…  We bounced against the sandy bottom at least 5 times…  pretty much exactly where the Transas data would tell you we should.

This is not the first time we have found the Transas data significantly better than the Navionics.  In fact the only place we found Navionics better was one place where Transas showed “unsurveyed”.

What happened here?  Because the whole bay is charted just about a foot deeper than it really is, I’m betting the survey Navionics used was done at high tide and then not corrected for that fact.  In other places we see Navionics with bad data that is WILDLY improbable just to look at.  That tells me they do not have cartographers actually reviewing data, but just plug raw ugly garbage into an algorithm, and (surprise!) they get pretty garbage out.

But… all that drama and whining aside…  we are in Rock Harbour waiting for a convenient high tide so we can get out–without polishing the bottom of our keel.

3 Responses to Dealing with Two Watches